On 5-6 June, the twelfth edition of the European Development Days (EDDs) brought together the international development community under the main thread of “Women and Girls at the Forefront of Sustainable Development: protect, empower, invest”.

During the two days, decision-makers, practitioners, and advocates exchanged views and experiences in supporting in the vital role of women and their full and equal participation in achieving the Sustainable Development Goals (SDGs).

We caught up with Antionetta Romano, Sexual and Gender Based Violence (SGBV) Advisor at the Netherlands Red Cross, to hear more about their work to increase awareness of SGBV and support survivors.

Antonietta, you have travelled to Brussels to attend the EDDs 2018 – what topics are you especially interested in following and why?

The Netherlands Red Cross has programmes that are focussed on addressing SGBV, so while I am interested in all sessions, my main interest is in the discussions relating to the theme of “ensuring the physical and psychological integrity of women and girls”. We have two specific SGBV-related programmes in Burundi and South Sudan, but it is also a cross-cutting issue for our work in other countries in Africa.

Violence against women and girls is one of the most widespread human rights violations globally, impacting health and well-being, as well as access to quality education and employment. Are there any specific challenges faced in conflict-affected areas like South Sudan and Burundi?

When we are talking about conflict-affected zones, even if it is low-intensity conflict, we are talking about a breakdown in legal systems, in social protection, and in family networks. Violence in general increases, but I think it important to stress that sexual violence against women is widespread and used as a weapon of war in many contexts – an issue that we are also trying to address through our programmes. This vulnerability is multiplied in other aspects of women’s daily lives; recent studies show how domestic violence for example, increases during conflict.

Could you tell us a bit more about the Netherlands Red Cross’ work around SGBV?

We work on both prevention and response to SGBV. On one side, we look at encouraging cultural and behavioural change, with a special focus on young people and men as agents of change. This is the main component through which we try to tackle issues related to gender equality; the stereotypes, and the cultural acceptance of violence that exists. On the other side, we respond to the needs of SGBV survivors with a package of services. Of course, we can’t deliver all services, so we try to coordinate with other actors to reinforce referral systems for SGBV survivors.

Finally, we are now entering a second phase where we will try to support these women to improve their economic situation through income-generating activities. Our approach here is two-fold: to rebuild the human dignity of survivors, and to reduce the risks of SGBV for the most vulnerable women in the community.

These are the general components of the approach, but our activities are tailored to the needs and the local cultural context.

So, the projects look different in Burundi and in South Sudan?

Yes, because the context and needs are different. In Burundi, we are working in an urban area, and as there is already a support mechanism for SGBV survivors in place, our focus is on strengthening coordination and creating synergies. We work in partnership with the International Committee of the Red Cross (ICRC), which provides medical and psychological assistance for instance, while the Burundi Red Cross is in charge of the awareness raising aspects and referral to other services like the legal system, or to shelter providers when the woman’s life is in danger and she needs to be protected. Here, our approach to economic empowerment is based on the individual needs and wishes of each survivor.

In South Sudan on the other hand, the income-generating activities are quite different as we have a more community-based approach due to cultural norms. We are working in a remote, rural area and therefore often engage with midwives as agents of change, as they assist in traditional births. Given that there was no established coordination mechanism, we have been trying to create one in collaboration with other relevant actors, including public authorities and local organisations. We all got around the table to discuss how to set up an adequate referral system, a protocol, as well as the best ways to ensure survivor confidentiality and respect, in line with the guiding principles on gender-based violence – this work is really rewarding because the level and quality of services available for survivors can really be increased!

Often hidden, discussions regarding SGBV can be extremely sensitive. How are you working to increase awareness and promote long-term behavioural change?

We work with young people and teachers in schools and have created “debating clubs” to discuss different topics that relate to gender equality, to SGBV, and to reproductive health more generally. These clubs have a per-to-peer approach: the teacher often supervises, but the young people organise sessions and debate amongst themselves, and we provide support in the form of tools and ideas.

The engagement of men in the community is also very important and can be tough. Sometimes they are defensive and react by asking why we are always talk about women as survivors. Usually, the National Societies that we work with organise general awareness raising actions like Red Cross volunteers running information sessions, or campaigns throughout cinemas, but our main strategy is to engage opinion leaders, both men and women, who have influence in society and can set an example. 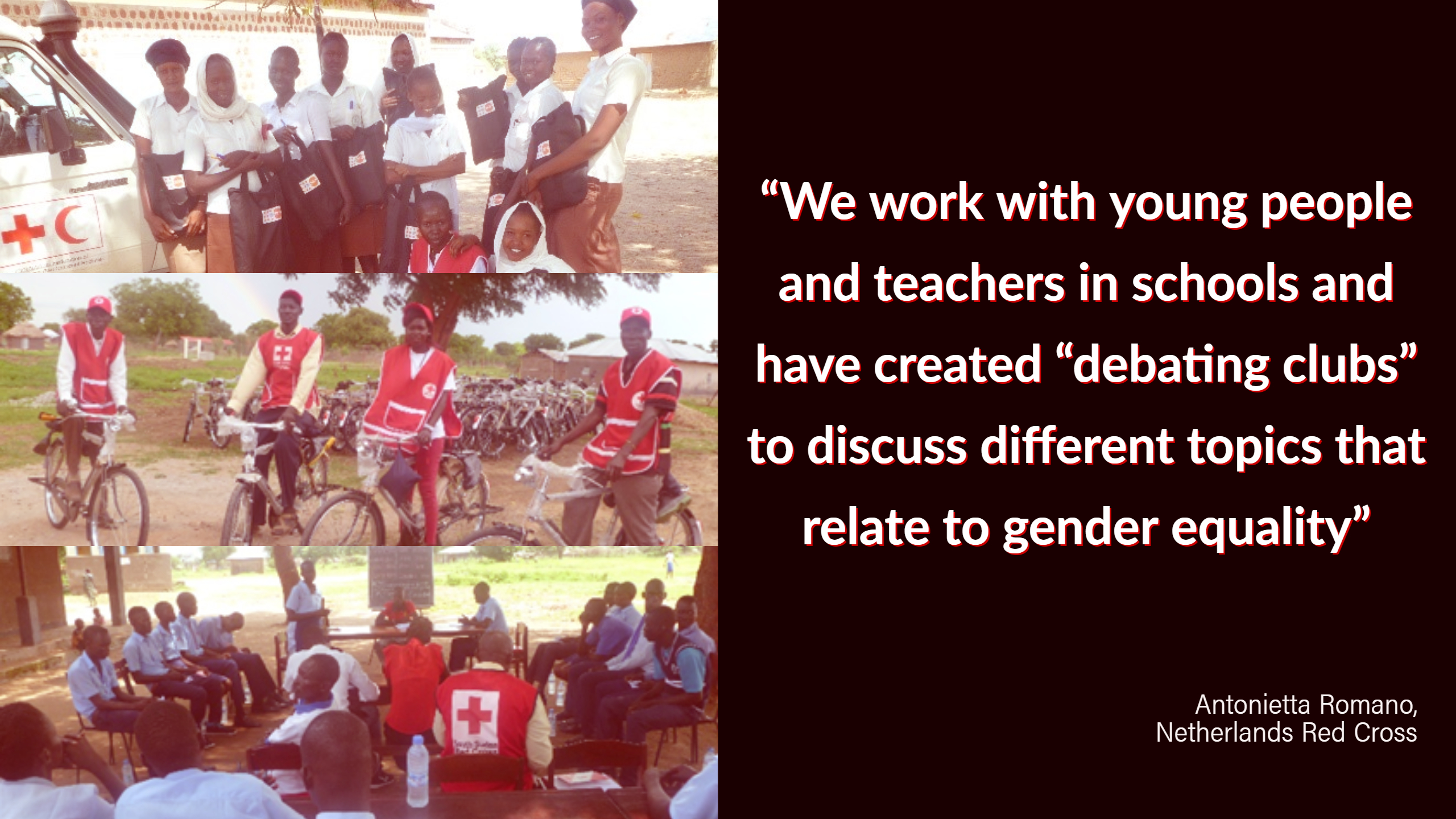 You mention the defensive reaction of some men. Are they also affected by SGBV?

Yes. While the clear majority of SGBV survivors are women, there is also a minority of men. It can be very difficult to have accurate statistics. In conflict settings especially, rape is sometimes used against men as a weapon. There are also cases of domestic and other kinds of violence against men, which we are trying to tackle in our programme. There is a general sensitivity to this now, but it needs to be studied further and approached in a different way. One of the biggest problems is that men often don’t disclose this information, unless they are wounded or facing a serious health risk.

Finally, can you share any positive development at this stage of the project?

I am proud to say yes! There are many positive changes that have taken place in the project, and in the lives of the people that we serve. Last month, as part of the mid-term review in Burundi, we asked a group of the volunteers involved in the project to identify the most significant change for them since the initiative began last year.

It was amazing because almost all of them talked about how this project had changed their minds and made them reconsider their own cultural assumptions; realising that they were also sometimes perpetrating violence against their wives, or against their children. Many retold how they had taken the decision to share what they had learned with their wives and to discuss how they could make changes in their own household. They shared how they are now taking care of their kids, helping their wives in the home, and asking for sex – previously seeing it as a right, they were now more aware of the importance of consent. Many revealed that they had reflected on the hypocrisy of going out denouncing SGBV in society, while committing violence at home.