As the European Union (EU) co-legislators are stepping up their efforts to reach an agreement on the next Asylum, Migration and Integration Fund (AMIF), the undersigned organisations wish to reiterate and update their priorities in light of the new Pact on Migration and Asylum. The present statement builds upon previous collective recommendations and concerns relating to the AMIF proposal highlighted in February 2019 and November 2019.

The undersigned welcome the EU co-legislators’ efforts to advance the negotiations of the AMIF with a view to avoiding potential implementation gaps for EU-funded programmes in 2021. While we acknowledge the commitment to develop a balanced financial instrument that would support inter alia asylum, regular migration and integration policies in Europe, key aspects should be further adjusted to ensure that it meets its stated objectives, including one of solidarity. From the perspective of the undersigned, for the fund to support humane and effective asylum and migration policies, the following should be taken into account: fixed minimum percentages should be foreseen for the Fund’s specific objectives which may otherwise not receive sufficient resources in all Member States; the Partnership Principle should be strengthened both at national and EU levels; resettlement should be expanded and remain a protection tool for refugees most at risk; and activities related to the external dimension should be limited and more clearly defined.

The European Commission’s proposal on the AMIF fund does not require Member States to allocate minimum levels of funding to any of the Fund’s objectives, in contrast to the current AMIF requirements. Moreover, it does not foresee a specific objective related to solidarity.

To ensure that adequate funding remains available for specific Union priorities including relocation, we strongly recommend a dedicated objective on solidarity and fair sharing of responsibility across Member States, in line with Article 80 of the Treaty on the Functioning of the European Union (TFEU). Linking such an objective to a dedicated spending target will ensure that funds for activities contributing to solidarity, including capacity building, will not be competing with emerging priorities.

Likewise, on the basis of collected evidence, we would like to reiterate our recommendation for dedicated minimum percentages to projects and activities aiming at strengthening the Common European Asylum System (at least 20%), and to integration and regular migration (at least 20%), on the model of the current programming period. Evidence shows that Member States did not encounter difficulties in programming actions to achieve these quotas, and that in some cases they were necessary to ensure adequate spending on AMIF priorities. Minimum allocation priorities will better guarantee that AMIF supports fair and efficient asylum systems and responds to the integration needs of migrants and refugees. To ensure full accountability, the Regulation should set up minimum amounts as well as clearly defined actions which can be implemented for each of the four objectives.

Specific thematic concentration must also be identified within the Fund’s Thematic Facility. On the one hand, to ensure that enough resources are available to support EU asylum and integration programmes that have a clear European transnational value; on the other hand, to ensure that the need for emergency assistance does not impact the availability of budget for existing priorities.

Understanding that the provisions on partnership and multi-level governance included in the proposal for the Common Provisions Regulation (CPR) will remain the overarching framework for consultation with civil society and other relevant local, social and international actors according to themes, it remains crucial for all the undersigned that a dedicated AMIF Partnership Principle is set up therein. Such a dedicated AMIF Partnership Principle would help ensure an expert participation of relevant actors, including refugees and migrants themselves, to help design, develop, monitor and evaluate AMIF programmes on asylum, migration and integration at national level.

In addition, considering the larger share of money that will be made available under the Thematic Facility, we continue to call for the establishment of an EU level Partnership Principle, that would ensure a similar structured dialogue between the European Commission and these same actors on the programming and implementation of activities under its direct management, including for emergency assistance.

It is a well-known fact that refugees and migrants, as well as all above mentioned actors, are prime observers of the gaps and shortcomings in the implementation of EU asylum and migration policies at the national and local level. At times also acting as service providers themselves, they can play a major role in adjusting their activities to adequately meet new needs. This rich experience and knowledge should be perceived as a useful resource in the programming of EU dedicated money, including also for cost efficiency purposes.

UNHCR estimates that the number of refugees in need of resettlement will increase to nearly 1.445 million by 2021. COVID-19 has brought significant challenges with an unprecedented health crisis. It has also caused an economic crisis and impacted access to essential services, both increasing and exacerbating the vulnerabilities of those most in need, including refugees. Solidarity as envisaged in the Global Compact on Refugees (GCR) is more relevant and needed than ever. The situation requires the international community to operationalise solidarity. The successful mobilisation of predictable and additional funding to match renewed efforts of large refugee hosting countries is an essential requirement for the application of the GCR.

The undersigned welcome the call to the EU for more solidarity included in the Pact on Migration and Asylum and as a foundation for growing resettlement and complementary pathways in 2021 and beyond. Yet, in light of the growing global resettlement needs and the limited resettlement spaces available worldwide, increased efforts are needed, in addition to guaranteeing direct access to asylum in the EU. The EU has increasingly played a critical role in encouraging and supporting the expansion of resettlement, and EU funding is a key incentive for Member States to continuously scale up programmes. We therefore regret that the new Pact seeks to extend the collective EU pledge for nearly 30,000 places made at the Global Refugee Forum in 2019 to a two-year scheme, signalling an absence of EU financial support for new pledges in 2021.

Additional EU funding is thus key to support the expansion of resettlement, family reunification as well as complementary pathways of admission to protection in the EU, such as community sponsorship and skills-based pathways for study and work. Expansion of legal pathways including humanitarian admissions to the EU should remain complementary and not a substitute to resettlement, which in addition to asylum should remain the primary tool to provide protection to refugees at risk. Resettlement must remain a protection-centred tool and should not be conditional on other policy objectives such as the implementation of readmission agreements or a reduction in numbers of asylum applications. Fixed amounts per resettled person should be adequate to cover resettlement efforts.

The Pact on Migration and Asylum reiterates the importance of effective EU coordination for international partnerships and the key role that the future Neighbourhood, Development and International Cooperation Instrument (NDICI) will play in the field of migration and asylum. It is, therefore, essential that clear mandates are defined for interventions that can be financed by the Asylum and Migration Fund and NDICI, while also ensuring alignment of AMIF funding with the EU’s treaty-based commitment to policy coherence for development (PCD) and respect to international commitments. Financial support from AMIF in non-EU countries should be rights-based and limited to those priorities that are inherently linked to the internal dimension of EU asylum and migration policy, such as resettlement spending outside the EU, regular migration, returns, and post-return/arrival assistance and reintegration for returning migrants.

The undersigned organisations thus support the proposal to introduce maximum ceilings for expenditure in non-EU countries, as well as the proposal to reserve the allocation of funding to activities identified with specific qualifying criteria. This would guarantee that the internal focus of the fund is respected. Actions where funds are allocated to be spent inside the EU (e.g., lump-sum payments for resettlement) should not be counted towards external expenditure.

To safeguard the implementation of PCD in the AMIF, stronger consultations, review and transparent monitoring mechanisms are also needed to ensure that the current overlaps of EU internal and external funding on the same priority areas, in the same countries, and with differing implementation approaches do not continue in the next Multiannual Financial Framework (MFF). 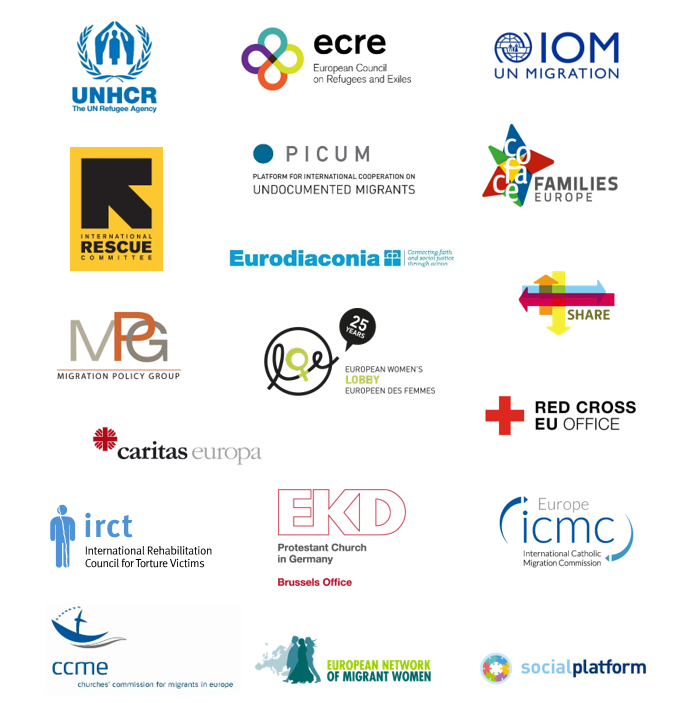