Supporting Niger, key cross-road of migrations to the EU via Libya

On 4 June, Red Cross EU Office director, Denis Haveaux spoke at a hearing on Supporting Niger, key cross-road of migrations to the EU via Libya at the European Parliament organised by the Committee on Civil Liberties, Justice and Home Affairs (LIBE) in association with the Committee on Development (DEVE). On this occasion, he underlined the importance of protecting migrants as they make their way across the country.

Niger has long been a key hub for migration. Agreements between the Economic Community of West African States (ECOWAS) allow people to move freely within Western Africa up to Niger. However, from Niger northward, migrants are branded “illegal” and are thus forced to rely on smugglers to reach Libya, and subsequently the EU. Located on the main route that connects West Africa and the Sahel to more affluent countries, such as Algeria and Libya, Agadez is a vibrant epicentre of intra-African migration. Of migrants travelling this route, an estimated 30 percent eventually end up on a boat towards Europe. Agadez has therefore become a point of focus for EU migration policies.

During the hearing, statements about the situation in Niger came from Members of the European Parliament (MEPs) and representatives of country delegations and non-government organisations. MEP Linda McAvan (S&D, United Kingdom) underlined that in terms of development, Niger is a key recipient and EU partner, having received approximately EUR 600 million to implement social policies, as well as 230 EUR million through the Emergency Trust Fund for Africa.

Many at the hearing pointed out that for Nigerien authorities, stability and development take precedence over migration-related matters. “Security and development are the key issues to work on in the country”, stated Ambassador Raul Mateus Paula, Head of the EU delegation to Niger.

The European Commission mentioned other projects it is supporting in the country, such as the ‘Plan of action for rapid economic impact in Agadez’ (PAIERA), which has created almost 20,000 jobs as an alternative to the smuggling industry. PAIERA also reaffirms the importance of contined support for UNHCR’s Emergency Transit Mechanism, which enables the most vulnerable refugees evacuated from Libya to be resettled to Europe.

The Red Cross Red Crescent Movement has a strong presence in Niger, including nine European Red Cross Societies that are working in collaboration with the Niger Red Cross to deliver programmes aimed at strengthening resilience, food security, nutrition and health. A combination of circumstances, such as a lack of documents or the loss of social networks, mean that migrants can be extremely vulnerable to threats and abuse on their way towards Europe, jeopardising their wellbeing and safety. Since 2013, the French Red Cross, has been running a programme that provides medical and psychosocial care to migrants in transit through the Agadez region. 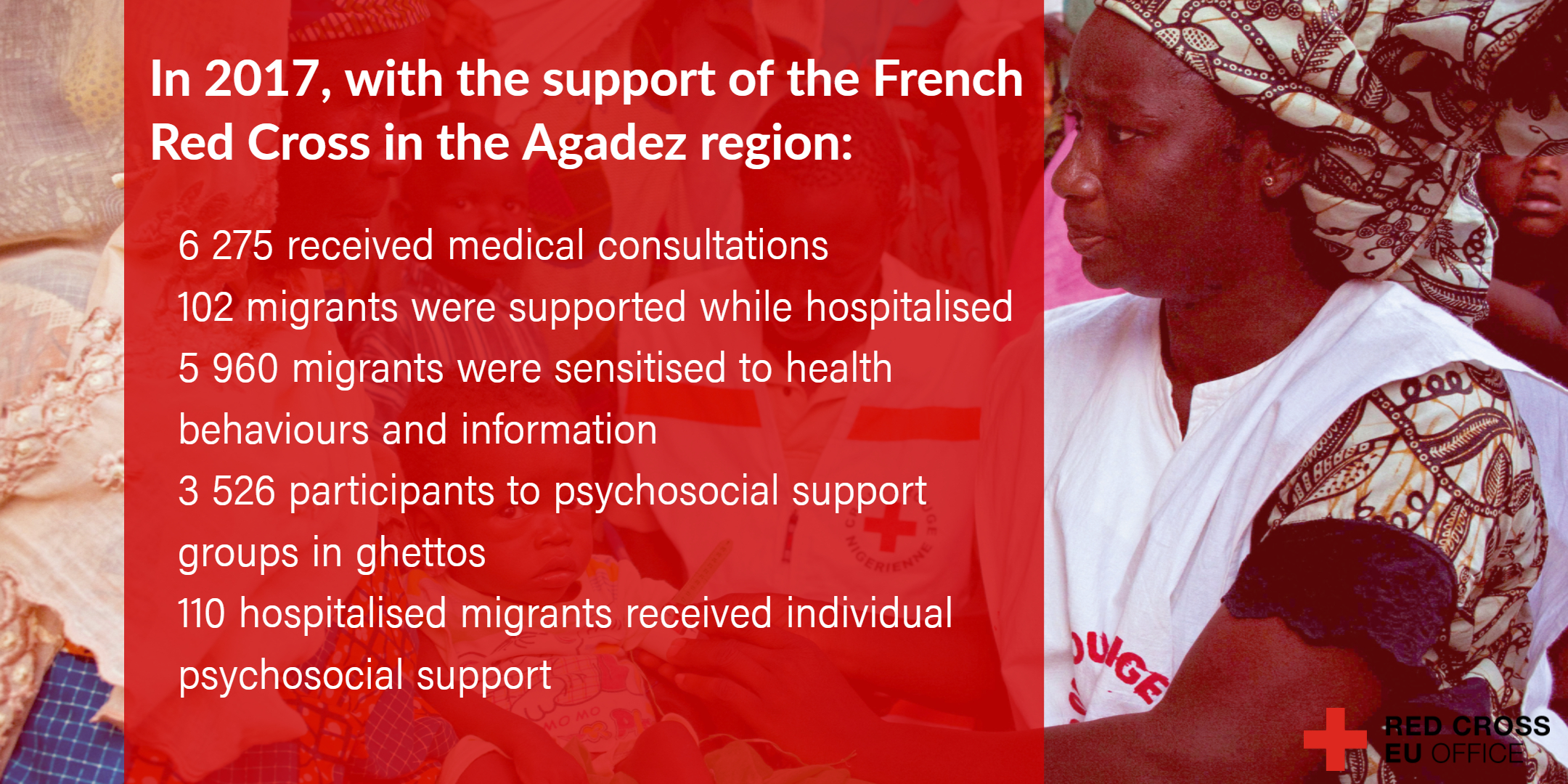 Mr Haveaux highlighted key areas of concern regarding the EU’s current approach to the situation of migrants in Niger. “The crackdown on irregular migration has complicated access to migrants as they increasingly go into hiding, use more dangerous routes, and are hesitant to approach humanitarian services” he stressed. Emphasising that too little EU funding was made available for local development, Mr Haveaux recommended that the European Parliament and EU Member States put more emphasis on strengthening the resilience of vulnerable people rather than on increasing law enforcement efforts.

In answering the question of how to work better together to tackle the vulnerability of migrants en route to the EU, Member of the National Assembly of Niger, Mano Aghali commended Red Cross programmes implemented so far in the country. “By building bridges with local health systems, Red Cross health programmes are playing a key role in improving referrals and supporting access to health services for all”, he said.